Stability, quench, and current sharing in Roebel and CORC cables for HEP magnets 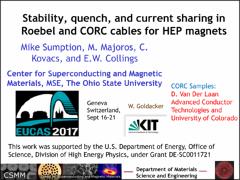 For YBCO cables, at least CORC and Roebel Type, cooling efficiency has a very strong influence on stability Two factors which strongly influence this are (i) epoxy impregnation, or, even (ii) simple kapton wrapping for samples in bath cooled cryogen Model development can take a lot from LTS for quench – but a major different is the low fill factor of YBCO and the high Tc. The former tends to suppress the ohmic heating component and the latter increase the cooling A simple model was developed which fit the data well and could be used predictively As in LTS, HTS with high levels of cooling and a heat disturbance are better described in terms of MQP rather than MQE HTS cables can be much less stable against external perturbations than internal ones because of a thermal diffusion time between the tapes leading to a premature excursion to film boiling

This work was supported by the U.S. Department of Energy, Office of Science, Division of High Energy Physics, under Grant DE-SC0011721