A model for the compositions of non-stoichiometric intermediate phases formed by diffusion reactions, and its application to Nb3Sn superconductors 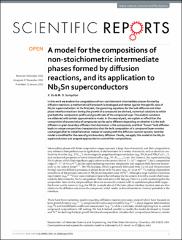 In this work we explore the compositions of non-stoichiometric intermediate phases formed by diffusion reactions: a mathematical framework is developed and tested against the specific case of Nb3Sn superconductors. In the first part, the governing equations for the bulk diffusion and interphase interface reactions during the growth of a compound are derived, numerical solutions to which give both the composition profile and growth rate of the compound layer. The analytic solutions are obtained with certain approximations made. In the second part, we explain an effect that the composition characteristics of compounds can be quite different depending on whether it is the bulk diffusion or grain boundary diffusion that dominates in the compounds, and that “frozen” bulk diffusion leads to unique composition characteristics that the bulk composition of a compound layer remains unchanged after its initial formation instead of varying with the diffusion reaction system; here the model is modified for the case of grain boundary diffusion. Finally, we apply this model to the Nb3Sn superconductors and propose approaches to control their compositions.

In summary, a mathematical framework is developed to describe the compositions and layer growth rates of non-stoichiometric intermediate phases formed by diffusion reactions. The governing equations are derived and analytic solutions are given for compounds with narrow composition ranges under certain approximations. We also modify our model for compounds in which bulk diffusion is frozen, of which the bulk is not in equilibrium with the rest of the system. Based on this model, the factors that fundamentally determine the compositions of non-stoichiometric compounds formed by diffusion reactions are found and approaches to control the compositions are proposed.

The work is funded by the US Department of Energy, Division of High Energy Physics, under an SBIR program.