Interrogating the Blue Room: Reflections on a Turn-of the-Century Magic Show and the Veracity of the Senses 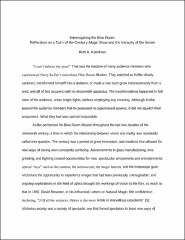 The illusion was first created and presented by John Henry Pepper and John Walker at the Royal Polytechnic Institute in London where it premiered under the title "Metempsychosis" in 1879. Shortly thereafter, Harry Kellar, renowned stage magician began using the technique in his "Blue Room", a stage illusion wherein audiences watched as Kellar slowly transformed himself into a skeleton or made a rose bush grow instantaneously from a seed right before their eyes. Kellar performed his Blue Room illusion throughout the last two decades of the nineteenth century, a time in which visual evidence's relationship to reality was being called into question.