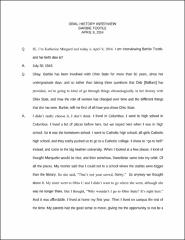 After graduating from an all-girls Catholic school, Barbie Tootle entered Ohio State as a freshman in 1961. She was a student in the College of Commerce, now called the Fisher College of Business, at a time when very few women students were in the program. She went on to earn a master’s degree in Sociology in 1968 while serving as a graduate assistant at the Disaster Research Center. In 1974, she became the Coordinator for Greek Affairs in the Office of Student Life; after eleven years, she became a program coordinator in the President’s Office. She ended her career at Ohio State as special assistant to President E. Gordon Gee. Throughout the interview, Tootle reflects on how student life on campus has changed during the second half of the twentieth century and the early part of the 21st century, particularly for women.