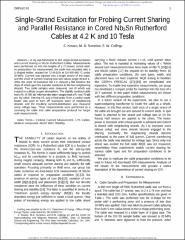 A rig was fabricated to test single-strand excitation and current sharing in Nb3Sn Rutherford Cables. Measurements were performed on 400 mm lengths of a 27-strand, cored cable. In preparation for measurement, the cable was mounted onto a U-shaped holder, reacted for 72-48-50 h at 210-400-665 °C under 20 MPa. Current was injected into a single strand of the cable, and the onset of current sharing was seen above single strand Ic. After the onset of transition the I-V showed a flat baseline the slope of which gave the transfer resistance to the two neighboring strands. Two cable samples were measured, one of which was reacted in a dilute oxygen atmosphere. The slightly oxidized cable had a R// of 280 nΩ whereas the other sample had a R// was 70 nΩ per lay pitch. Varying I/Ic and a heat pulse from a carbon paste heater was used to turn off successive pairs of neighboring strands, and the resulting current-distribution was measured using voltage taps. These measurements were performed as a screening for cable and cable preparation protocol for larger scale measurements.

We have designed a fixture and performed single-strand excitation measurements on Nb3Sn Rutherford Cable under magnet relevant conditions. For a slightly oxidized cable, the resistance with the nearest neighbor per lay pitch was 280 nΩ. For a less oxidized sample the resistance with the nearest neighbor was 70 nΩ per lay pitch. Transverse current sharing occurred due to normal zones formation, and the width of the current sharing was determined for varying i and heat pulse energy deposition.

Funding was provided by the U.S. Department of Energy, Office of High Energy Physics, under Grant No. DE-SC0011721.

Copyright (c) 2017 IEEE. Personal use is permitted. For any other purposes, permission must be obtained from the IEEE by emailing pubs-permissions@ieee.org.