Demonstration of a Practical Nb3Sn Coil for an Actively-Shielded Generator 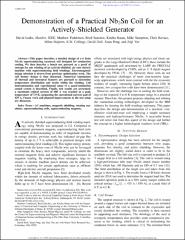 This paper describes a detailed design of a 6 Tesla Nb3Sn superconducting racetrack coil designed for conduction cooling. We then describe a bench test pursued as a proof of concept for one winding of an actively-shielded, air core electric machine with superconducting field windings. Electromagnetic design selection is drawn from previous optimization work. The coil former design is then discussed. Numerical simulations of thermal and structural features are pursued to determine temperature distribution and strain within the winding. Coil instrumentation and experimental setup of a quasi-conduction cooled system is described. Finally, test results are presented; a maximum critical current of 480 A was reached at a peak temperature of 7.9 K, surpassing the operational current goal of 435 A. Future work and planned improvements to the test setup are discussed.

In this paper, the process for the design of a superconducting coil, and a process for its bench test was described. FEA analysis and prior optimization work was used to select critical current and field targets. Then, a support structure for the coil windings was designed, and its thermal and structural interactions with the coil were analyzed. The coil was instrumented and then energized to test critical current capability. A small reservoir of liquid-helium was used to imitate cryocooler thermal connections. Due to equipment constraints, the radiation heat load seen by the test coil was much higher than planned. However, the coil surpassed performance targets even at higher temperatures of 7.9 K. The current capability demonstration gives confidence that, when properly shielded, the coil will be able to operate at desired currents with a reasonable safety margin (26%). Future work is planned to more accurately capture heat load and cooling conditions seen within the full machine design.

This work was supported as part of a NASA LEARN project: Grant NNX15AE41A.

Copyright (c) 2017 IEEE. Personal use is permitted. For any other purposes, permission must be obtained from the IEEE by emailing pubs-permissions@ieee.org.