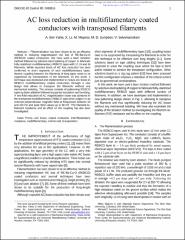 Filamentization has been shown to be an effective method in reducing magnetization AC loss of RE-Ba-Cu-O (REBCO) coated conductors. We have used a laser striation method followed by selective electroplating of copper to fabricate fully-stabilized multifilamentary REBCO tapes with 12, 24 and 46 filaments. While expected levels of AC loss reduction has been confirmed in short segments of such multifilamentary tapes, electric coupling between the filaments of long tapes needs to be suppressed by transposition of the filaments. In this work, a technique was developed and implemented to reduce AC losses in REBCO multifilamentary coated conductors through a new design that allows to transpose the filaments without any mechanical twisting. The process consists of patterning REBCO tapes by laser ablation followed by partial insulation and bonding. A two-fold reduction of AC magnetization losses was achieved in the transposed multifilamentary REBCO tape when subject to an external perpendicular magnetic field at frequencies between 50 and 200 Hz and peak field values up to 88 mT. The filament-to-filament resistance and its effect on the coupling has also been investigated.

In this work, a laser striation process followed by selective electroplating has been used to produce multifilamentary tapes with different number of filaments. Expected reduction in AC losses has been achieved. Moreover, a new design allowing filaments transposition have been presented and implemented. The obtained transposed multifilament samples show promising AC losses reduction. In addition, a similar design could be used with a higher number of filaments to reduce the loss even more.

This work was partly funded by the Army Research Laboratory.

Copyright (c) 2016 IEEE. Personal use is permitted. For any other purposes, permission must be obtained from the IEEE by emailing pubs-permissions@ieee.org.