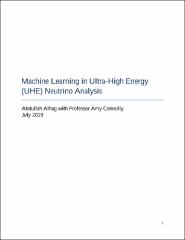 The Antarctic Impulsive Transient Antenna (ANITA) is a NASA long-duration balloon experiment with the primary goal of detecting ultra-high-energy (> 1017 eV) neutrinos via the Askaryan Effect. This research investigates the usability of a Convolution Neural Network (CNN), a form of machine learning, in differentiating a form of background noise from the data obtained by ANITA from other types of signals. The background noise events of interest here are “payload blasts,” which are background noise events caused by an unknown object on the ANITA payload. CNN is a technique most commonly used in analyzing visual imagery. It is built on the idea of multilayer perceptron, which is used in classifying nonlinear data. The classification is done by identifying features that are special to the set of events being classified. Both TensorFlow [1] and PyTorch [2] were used to create models that can classify the payload blasts from ANITA data vs. non-payload events. These models however can be extended to classify other events that are of interest. The trained CNN models were able to accurately classify the payload blasts with most models being able to achieve an accuracy of around 98%.