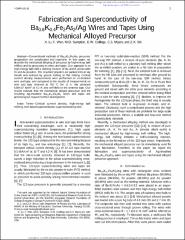 Conventional methods of Ba0.6K0.4Fe2As2 precursor preparation are complicated and expensive. In this paper, we describe the mechanical alloying of precursor by high-energy ball milling and its processing to wires and tapes. Our approach is to high-energy ball-mill a starting mixture of Ba and K pieces with Fe and As powders. The resultant powders are packed into an Ag sheath and reduced by groove rolling or flat rolling. Critical current density measurements were performed on un-sintered wire and tape, and compared to the results of measurements on wire and tape sintered at 750 oC for 12 h. We achieved 6.98×104 A/cm2 at 4.2 K and self-field in the sintered tape. Our results indicate that the mechanical alloyed precursor and the resulting Ag-sheathed Ba0.6K0.4Fe2As2 wires and tapes are promising but require further development.

This work was supported by the National Natural Science Foundation of China (Grant No. NSFC-U1432135), the Fundamental Research Funds for the Central Universities, and the Scientific Innovation Research Foundation of College Graduates in Jiangsu Province (KYZZ15_0053).

Copyright (c) 2016 IEEE. Personal use is permitted. For any other purposes, permission must be obtained from the IEEE by emailing pubs-permissions@ieee.org.