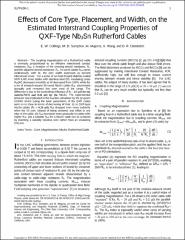 The coupling magnetization of a Rutherford cable is inversely proportional to an effective interstrand contact resistance, Reff, a function of the crossing-strand resistance, Rc, and the adjacent strand resistance, Ra. In cored cables Reff varies continuously with W, the core width expressed as percent interstrand cover. For a series of un-heat-treated stabrite-coated NbTi LHC-inner cables with stainless-steel (SS, insulating) cores Reff(W) decreased smoothly as W decreased from 100% while for a set of research-wound SS-cored Nb3Sn cables Reff plummeted abruptly and remained low over most of the range. The difference is due to the controlling influence of Rc – 2.5 μΩ for the stabrite/NbTi and 0.26 μΩ for the Nb3Sn. The experimental behavior was replicated in the Reff(W)s calculated by the program CUDI© which (using the basic parameters of the QXF cable) went on to show in terms of decreasing W that: (i) in QXF-type Nb3Sn cables (Rc = 0.26 μΩ) Reff dropped even more suddenly when the SS core, instead of being centered, was offset to one edge of the cable, (ii) Reff decreased more gradually in cables with higher Rcs, (iii) a suitable Reff for a Nb3Sn cable can be achieved by inserting a suitably resistive core rather than an insulating (SS) one.

The coupling magnetization of a Rutherford cable is inversely proportional to an effective interstrand contact resistance, Reff, defined as Reff = [1/Rc + 20/N3Ra]-1. In uncored cables Reff is primarily controlled by Rc. The LHC magnet’s uncored NbTi cables, wound with specially heat treated stabrite-coated strands, evidently have acceptable Rcs. It has been reported that the current ramping of LHC magnets produces field errors: (i) in dipoles of about 1 unit of b1 and less than 0.1 units of cn, consistent with Rc well above 50 μΩ, (ii) in quadrupoles of about 2 units of b1 and less than 0.2 units of cn, consistent with Rc between 100 and 150 μΩ. Evidently such Rcs have contributed to the successful operation of the LHC dipoles and quadrupoles to date and hence could be thought of as new target values when designing the Nb3Sn cables for the LHC upgrades. But with measured Rcs of typically 0.3 μΩ bare Nb3Sn cables are unsuitable; the cables need to be furnished with some kind of core to separate the crossing strands. In cables with insulating cores Reff (now a function of both Rc and Ra) increases continuously with W (% core cover), with Ra eventually taking over as the controlling ICR. In seeking an optimal core width a large assortment of research cables were wound and measured over the years. The results, assembled and compared here for the first time, show Reff(W) reaching acceptable values only when W approached ~90% beyond which it increased very steeply. These experimental values were compared to modelling results using the program CUDI© choosing as our model cable a variablewidth- core version of QXF. Further application of the program demonstrated that core positioning was important, Reff decreasing by about 2½ times as the cores shifted from the center to one edge of the cable. As a result it is predicted that irregularities in core placement could produce a large scatter in Reff. The sensitivity of Reff to core width and position in the optimal large-W range leads to the suggested inclusion of a core, not of SS (which has a stable, insulating oxide surface layer), but of a resistive composite such as Cr-plated SS or Crplated Cu.

Copyright (c) 2015 IEEE. Personal use is permitted. For any other purposes, permission must be obtained from the IEEE by emailing pubs-permissions@ieee.org.