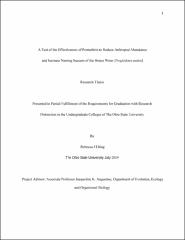 Parasites often induce stress in their host, impacting hosts’ survival and reproductive success. This impact may be significant to the host, or hardly noticeable, depending on the parasite and intensity of the infestation. Some commensal organisms can be neutral or beneficial to the organism, such as when they feed on detritus. In birds, parasites not only appear on the organism itself but can reside in their nest. Although most birds show a negative correlation between parasite loads and nestling growth, house wrens appear to have a non-significant impact from parasite loads. One way to determine the effect of parasites is to fumigate the infested area with insecticides. This study has two purposes. First, to determine if arthropod infestation affected nesting success of house wrens (Troglodytes aedon). Secondly, this study looked at the distribution of arthropods in nests treated with permethrin or sprayed with water as a control. Previous studies on wrens did not examine permethrin as a fumigate. Nesting success and mite abundance data was collected from 72 first nests and 19 re-nesting attempts between April to August 2015 in Lima, Ohio. Nestlings were weighed 10 days after their hatch date. Arthropods were collected using a burlese funnel trap and counted from the nests after the nestlings had fledged. Overall, permethrin significantly had an effect on mites but not on ants. Mite and ant load had no effect on nestling success, even when parasite load was significantly reduced. House wrens seem to have behaviors (such as removing old nest materials) that allow them to keep mite infestations below harmful levels. Although we did not see a correlation between mite load and nesting success, numerous sublethal effects could be considered in the future. Further research should utilize a comparative framework to determine when mite infestations affect nesting success, because some species show negative correlation and others seem to be unaffected.