Evaluation of Effects of Different Necrotic Enteritis Models in Chickens 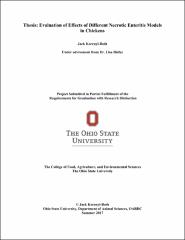 The purpose of this research is to evaluate the effects of different necrotic enteritis (NE) models in boilers. Necrotic enteritis is a multifactorial acute enterotoxaemia that is often fatal and costs $6 billion annually around the globe. Currently, the most widely used research induction of NE is a combination of main causative agent Clostridium perfringens (CP) and Eimeria maxima (EM). Although occurrence of NE recently arose with CP toxin NetB without the presence of Eimeria. In this experiment, 9 sets of birds were given different treatments. All birds were treated with Salmonella Enteritidis, except negative control groups. Remaining groups received a combination of EM strains Guelph and M6 with different forms of CP, and different forms of CP alone to further explore the roles toxins and strains play in the pathogenesis of NE. Through the analysis of lesion scores, mortalities, body weights, and necropsies, all models were evaluated for severity of NE. Groups challenged with EM and CP Net B- (a dual infection model) gave the strongest indication of NE, with significantly higher lesion scores (p<0.05). Also showing signs of NE were the groups challenged by feed with CP, specifically the Net B+ form, though lesions scores were lower (p<0.05) than dual infection models. The unwashed form of CP, which contained toxins, metabolites, and by products from growth, showed the most drastic change in percentage bodyweight gain change (p<0.05). The washed form of CP, which consisted of the anaerobic bacteria alone, produced similar results, just slightly lesser change in percentage bodyweight gain. In conclusion CP alone did not create lesions, but did change performance characteristics which were typical of NE. These results provide insight regarding effective NE model, which will allow for preventative methods to be backed by research and science.