The Impact of Faba Bean Theft in Rural Ethiopia: To Dispute or to Reside Together in Harmony? 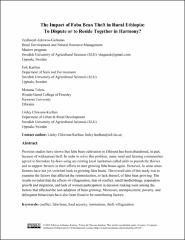 Previous studies have shown that faba bean cultivation in Ethiopia has been abandoned, in part, because of widespread theft. In order to solve this problem, many rural and farming communities agreed to formulate by-laws using an existing local institution called Iddir to punish the thieves and to support farmers in their efforts to start growing faba beans again. However, in some areas farmers have not yet switched back to growing faba beans. The overall aim of this study was to examine the factors that affected the reintroduction, or lack thereof, of faba bean growing. The results revealed that the effects of villagization, fear of conflict, small landholdings, population growth and migration, and lack of women participation in decision making were among the factors that affected the non-adoption of bean growing. Moreover, unemployment, poverty, and delinquent behaviours have also been found to be contributing factors.