The Impact of Road Networks on Crime Rates in Saudi Arabia 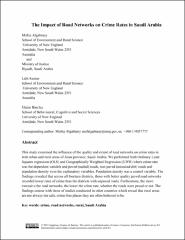 This study examined the influence of the quality and extent of road networks on crime rates in both urban and rural areas of Jizan province, Saudi Arabia. We performed both Ordinary Least Squares regression (OLS) and Geographically Weighted Regression (GWR) where crime rate was the dependent variable and paved (sealed) roads, non-paved (unsealed/dirt) roads and population density were the explanatory variables. Population density was a control variable. The findings revealed that across all fourteen districts, those with better quality paved road networks recorded lower rates of crime than the districts with unpaved roads. Furthermore, the more extensive the road networks, the lower the crime rate, whether the roads were paved or not. The findings concur with those of studies conducted in other countries which reveal that rural areas are not always the safe, crime-free places they are often believed to be.