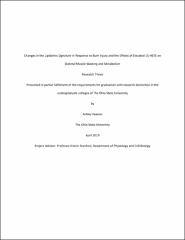 Patients with severe burn injuries experience dramatic changes in metabolism that are responsible for much of the pathophysiology of severe burns. These pathological changes begin with an ebb phase, which is an initial hypometabolic state, followed by a flow phase, which is a hypermetabolic state that typically starts on the third day post burn injury. Among the metabolic alterations following severe burn injury, massive lipolysis of the white adipose tissue (WAT) results in a dramatic increase in circulating lipids. In our lab, we have seen that this WAT lipolysis precedes other deleterious effects that are seen in response to burn injury including severe muscle wasting. Thus, we investigated the effect of severe burn injury on the concentration of signaling lipids, or lipokines, in plasma samples collected from 9 adult male and female burn patients with over 60% TBSA (Total Body Surface Area) burn injuries at each consecutive surgery following their admission to the hospital. Control samples were obtained from 9 age-matched male subjects. The serum samples were analyzed via MS/MSALL shotgun lipidomics. One-way ANOVAs determined which lipid species were significantly increased in circulation in response to the severe burn injury at each sequential surgery compared to normal subjects. There were significant increases in the circulation of eighteen different lipid species throughout specific time points post burn injury including eleven arachidonic acid metabolites (18-HETE, 5-HETrE, 11-dehydro TxB2, 15-HETE, 8-HETE, 18-HETE, 18-HEPE, 13,14-dihydro-15-keto PGE2, 13,14-dihydro-15-keto PGF2a, PGD2, and PGB2). Arachidonic acid metabolites have been seen to induce skeletal muscle wasting in myocytes, thus, the upregulation of arachidonic acid metabolites suggests that these signaling lipids may play a role in the muscle wasting seen in burn patients. To investigate this, the arachidonic acid metabolite that was most significantly elevated across all 9 burn patients, 15-HETE, was incubated with C2C12 myotubes for 4 hours at 0nM, 30nM, 100nM, and 300nM concentrations and qPCR was done to determine the expression of 3 ubiquitin-proteasome pathway genes, Fbxo32, Psma7, and Psmd4. The results showed that 15-HETE degreased expression of these genes indicating that it may down-regulate this pathway.