Conflicts of Child Marriage in Conflict: Who's story is heard? 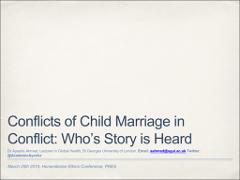 In this presentation, the story of childhood from the vantage point of conflict will be critiqued. Child marriage is often depicted as an event with an emphasis on the physical risks and consequences. Child marriage during conflict is viewed through a gender lens to explain the phenomenon of increased rates of child marriage. However, I will try to reframe child marriage as a process from birth. Such reframing gives space to accommodating the nuances that are experienced with child marriage, particularly in terms of the psychological impact of gender-based violence situated in war-violence, and the nature of a trauma related to being pre-scribed your destiny amid the constant threat of death during war and conflict. The fears and anxieties that surround the point of child marriage will also be explored, looking at the role of storytelling as both enhancing and reducing psychological harms. For example, because child marriage is an open taboo, folk stories and traditional oral-storytelling are embodied by generational memories of marriage whilst still a child. The juxtaposition between the silence of suffering and the extravagance of the meaning of child marriage will also be discussed. Whilst child marriage is forced marriage, erasing the child in the language of this practice also hides other forms of gender-based violence that are yet to be clearly recognised in policy and research as harmful traditional practices such as displaying of sheets post-wedding night or the silencing of voice. To conclude, I call for a more robust and rigorous research that is developed from conflict contexts rather than the application of standardised rights and ethical principles, with the hope that creating new conceptual frameworks will be able to structure the stories that are still lived, yet not known within the evidence-base on child (forced) marriage.