The use of child language in linguistic argumentation: Some methodological considerations 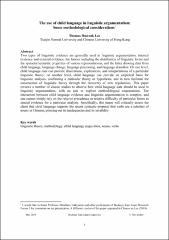