The current state of the Aspect Hypothesis 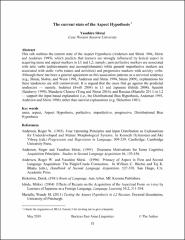 This talk outlines the current state of the Aspect Hypothesis (Andersen and Shirai 1994, Shirai and Andersen 1995), which predicts that learners are strongly influenced by lexical aspect in acquiring tense and aspect markers in L1 and L2; namely, past perfective markers are associated with telic verbs (achievements and accomplishments) while general imperfective markers are associated with atelic verbs (states and activities) and progressive markers with activity verbs. Although there has been a general agreement on this association patterns as a universal tendency (e.g., Shirai, Slobin, and Weist 1998, Andersen and Shirai 1994, Shirai 2009), explanations for these tendencies are still controversial. It is argued that the cases that go against the predicted tendencies — namely, Inuktitut (Swift 2004) in L1 and Japanese (Ishida 2004), Spanish (Salaberry 1999), Mandarin Chinese (Tong and Shirai 2016), and Russian (Martelle 2011) in L2 — support the input-based explanation (i.e., the Distributional Bias Hypothesis, Andersen 1993, Andersen and Shirai 1996) rather than nativist explanations (e.g. Bickerton 1981).