Northern and Southern variations on a theme: Notes on the Mandarin koiné of Qīng China 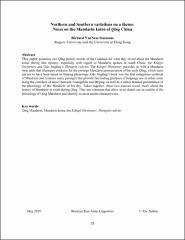 This paper examines two Qīng period records of the Guānhuà for what they reveal about the Mandarin koiné during that dynasty, especially with regard to Mandarin spoken in south China: the Kāngxī Dictionary and Gāo Jìngtíng's Zhèngyīn cuōyào. The Kāngxī Dictionary provides us with a Mandarin rime table that illustrates evidence for the prestige Mandarin pronunciation of the early Qīng, which turns out not to have been based on Beijing phonology. Gāo Jìngtíng's book was the first indigenous textbook of Mandarin and contains many passages that provide fascinating glimpses of language use in urban areas along the corridors of travel between Guǎngzhōu and Běijīng, as well as a rather detailed presentation of the phonology of the Mandarin of his day. Taken together, these two sources reveal much about the history of Mandarin in south during Qīng. They are witnesses that allow us to sketch out an outline of the phonology of Qīng Mandarin and identify its most salient characteristics.