Correspondence between the Korean and Mandarin Chinese pronunciations of Chinese characters: A comparison at the sub-syllabic level 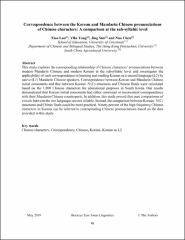 This study explores the corresponding relationship of Chinese characters’ pronunciations between modern Mandarin Chinese and modern Korean at the subsyllabic level and investigates the applicability of such correspondence in learning and reading Korean as a second language (L2) by native (L1) Mandarin Chinese speakers. Correspondence between Korean and Mandarin Chinese initial consonants and that between Korean -V(C) structures and Chinese finals were calculated based on the 1,800 Chinese characters for educational purposes in South Korea. Our results demonstrated that Korean initial consonants had either consistent or inconsistent correspondence with their Mandarin Chinese counterparts. In addition, this study proved that pure comparisons of vowels between the two languages are not reliable. Instead, the comparison between Korean -V(C) structures and Chines finals could be more practical. Ninety percent of the high frequency Chinese characters in Korean can be inferred to corresponding Chinese pronunciations based on the data provided in this study.