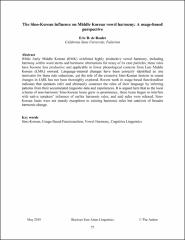 While Early Middle Korean (EMK) exhibited highly productive vowel harmony, including harmony within word stems and harmonic alternations for many of its case particles, these rules have become less productive and applicable to fewer phonological contexts from Late Middle Korean (LMK) onward. Language-internal changes have been correctly identified as one motivator for these rule reductions, yet the role of the extensive Sino-Korean lexicon in sound changes in LMK has not been thoroughly explored. Recent work in usage-based functionalism indicates that speakers infer and ultimately construct the rules of their language by inferring patterns from their accumulated linguistic data and experiences. It is argued here that as the local schema of non-harmonic Sino-Korean loans grew in prominence, these loans began to interfere with native speakers' inference of earlier harmonic rules, and said rules were relaxed; Sino-Korean loans were not merely exceptions to existing harmonic rules but catalysts of broader harmonic change.