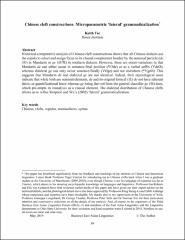 Historical-comparative analysis of Chinese cleft constructions shows that all Chinese dialects use the copula to select and assign focus to its clausal complement headed by the nominal particle (de (的) in Mandarin or ge (個/嘅) in southern dialects. However, there are micro-variations in that Mandarin de can either occur in sentence-final position (VOde) or as a verbal suffix (VdeO), whereas dialectal ge can only occur sentence-finally (VOge) and not elsewhere (*VgeO). This suggests that Mandarin de and dialectal ge are not identical. Indeed, their etymological roots indicate that while both are nominal elements, de and its original form di (底) do not have inherent deixis or quantificational force whereas ge being derived from the general classifier ge (個) does, which pre-empts its reanalysis as a clausal element. The dialectal distribution of Chinese clefts allows us to refine Simpson and Wu's (2002) 'lateral' grammaticalization.