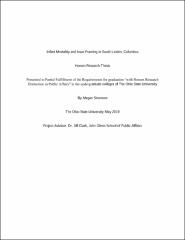 When public-private partnerships are utilized as a tool for proposing policy solutions to “wicked problems” in cities, frame asymmetry can arise as a result of competing stakeholder interpretations of the problem itself. In the case of Columbus, Ohio, a community health partnership was created to address the growing infant mortality crisis in neighborhoods such as South Linden. This approach to developing a city-wide policy solution brought about the following questions: How are the mobility needs of pregnant women in South Linden, an area notable for high rates of infant mortality, assessed by public decision makers? How does this differ from the ways in which these needs are assessed by service providers? If there are differences between the ways in which service providers and decision makers frame the issue of infant mortality reduction, are there differences between perceptions of resource accessibility and neighborhood needs for reducing infant mortality? Using a purposive, theoretical sampling approach to select key informants from pools of both decision makers and service providers directly related to the infant mortality crisis, key informant interviews were conducted to better understand how each group framed the issue of infant mortality, and how, if at all, these frames differed by informant groups. It was found that while decision makers in Columbus were more focused on addressing the infant mortality crisis through a series of mobility innovations, service providers spoke to the importance of the built environment and accessible neighborhood resources as a key part of reducing mortality rates. As a result, it is recommended that the community health partnership engage in frame reconciliation techniques to better address the asymmetries in their policy goals and issue framing.