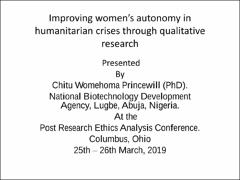 Women's diminished autonomy is of paramount concern to many researchers across the board. The degree of women's diminished autonomy varies from country to country. The consequences of women's diminished autonomy are enormous; ranging from adverse health effects, feeling of being inferior, lack of women's reproductive rights, lack of access to adequate healthcare, gender inequality, maternal/child mortality and morbidity and lack of access to education. In Nigeria, Women's diminished autonomy has led to women's discrimination, subordination, rape, domestic violence and spouse death. Unfortunately, because the government has decided to treat these issues with kid gloves, wives have resorted to killing men who batter them. An exploratory research design was employed for this study. A semi-structured interview was used to conduct thirty-four in-depth interviews and six focus group discussions with purposively sampled educated, semi-educated, and uneducated Ikwerre women in monogamous or polygynous marriages. The interviews and focus group responses revealed a low level of awareness of women's autonomy amongst the Ikwerre women in Nigeria. Responses from the women suggested that the Ikwerre culture of absolute respect for men and religious belief were the real reason behind women's diminished autonomy. The patriarchal society to which these women belong stereotype them into accepting a second position to the men. Educating men on the importance of women's autonomy, and empowering women financially will help improve women's autonomy. There is a need for the Nigerian government to address cultural aspects that condone and promote gender discrimination.