Share Repurchase Behavior and Its Impact on Investors: Differences Between the Automotive and Retail Industry 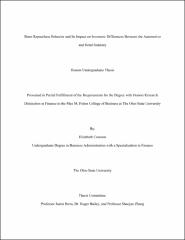