Impacts of Legalization of Recreational Marijuana on Alcohol Sales: Economic Substitutes or Complements? 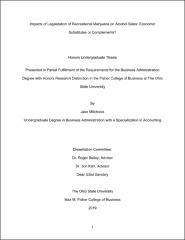 In 2012, Colorado and Washington became the first two states in the United States to legalize recreational cannabis. Since then, eight more states voted to recreationally legalize cannabis. One of the prime reasons cannabis has been legalized in many states is because of the tax revenue that it creates for each state. For example, Colorado’s Department of Revenue has reported nearly one billion dollars in tax collections since the state started reporting marijuana tax collections in February of 2014. States could not only use the tax revenue in a myriad of ways for government-run programs that increase jobs, but states could also save billions of taxpayers’ dollars in drug enforcement costs. However, the recreational legalization of marijuana has potential unintended impacts on the consumption of other goods available in the market, such as alcohol. Using data reported by states that have legalized recreational marijuana, crowd-sourced transaction data, and various other sources, this paper analyzes the relationship between marijuana and alcohol, attempting to determine whether or not the two substances are economic substitutes or complements. By progressing knowledge in this area of research, legislators and executives from the marijuana and alcohol industries could gain a more comprehensive understanding of the implications of marijuana legalization policies. In addition, it is essential to develop forecasts of growth and demand for the marijuana and alcohol industries to improve both industry-wide, and firm-level decision making.