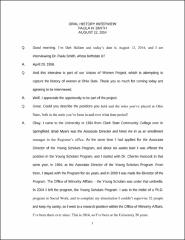 Paula H. Smith describes her career at Ohio State, which started in 1994 as Associate Director of the Young Scholars Program, under the umbrella of the then-Office of Minority Affairs. She left Young Scholars in 2004 to focus on her Ph.D. and to work at the ACCESS Collaborative Program, also under the umbrella of the then-Office of Minority Affairs, which is now the Office of Diversity and Inclusion. Smith discusses various aspects of the Young Scholars program and the Office of Minority Affairs, including perceptions of the program, women’s roles in the unit, personnel changes and conflicts, and changes related to the types of students served. Smith also discusses her involvement in the Black Faculty and Staff Coalition and other university-wide efforts to recruit African-American students. In addition, Smith talks about her experience as a black Catholic woman, both as a student at Ohio State and as an employee of the university. She says she believes women have made progress during her time at OSU, specifically mentioning child-care support and Title IX.