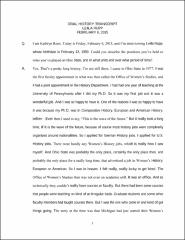 Leila Rupp describes her experience as the first faculty appointment in the Office of Women’s Studies at The Ohio State University, in 1977. Because the Office of Women’s Studies was not yet an academic unit at this time, Rupp’s position was a joint appointment with Ohio State’s History Department. As the first Women’s Studies faculty appointment, Rupp was influential in establishing and growing the Women’s Studies program at OSU, and developing its curriculum. In 1985, she moved to a full-time position in the History Department, which she held until she moved to continue her career at the University of California Santa Barbara in 2002. During her tenure at OSU, Rupp served as Graduate Chair, Interim Chair (1999-2000), and Chair (2000-2002) of the History Department. She discusses the changes she encountered throughout her time at OSU, including the changing demographics of the History Department faculty, and her experience early in her career as a female in a majority-male department. While at Ohio State, Rupp actively contributed to efforts to establish maternity leave for female faculty and to persuade the University to provide health benefits for domestic partners of same-sex couples. She was involved with the Association for Gay, Lesbian, and Bisexual Faculty and Staff, the Women’s Action Collective in Columbus, and Stonewall Columbus. In 2000, Rupp received Ohio State’s prestigious Distinguished Scholar Award.