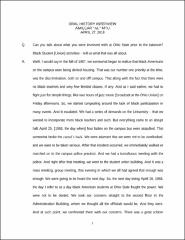 Amilcar "Al" Mtu recalls the events leading to and on April 26, 1968, when students staged a sit-in at Bricker Hall, then known as the Administration Building. He first discusses the issues that African-American students felt the Administration needed to address in 1968: a lack of black faculty and students, a lack of curriculum covering issues germane to black students, and general patterns of discrimination, particularly in housing. He then talks about the event that led to the sit-in – when several female members of the Black Student Union were removed from a campus bus. He subsequently details the day of the sit-in, as it unfolded at the Administration Building. He then discusses what happened after the sit-in, particularly the felony charges, including kidnapping, that were filed against 34 students who participated in the sit-in – all African Americans. Mtu describes the sense of betrayal and anger he and others felt from the Administration’s actions and what ultimately happened to the students. To see Mtu and three other students talk about these events, please go to http://go.osu.edu/CarmenCollection1968.