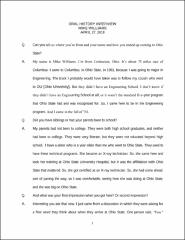 Mike Williams attended Ohio State from 1961-1962, then he returned in 1966 to finish his degree. He recalls his first impressions of campus when he was a freshman, and he recounts how much he and the campus had changed by the time he returned. Williams then talks about organizing efforts among African-American students to address issues they faced on campus as minority students. He also talks about the events leading to and on April 26, 1968, when students staged a sit-in at Bricker Hall, then known as the Administration Building. Included in his discussion is how the ongoing resulting legal matter forced out-of-town students to remain in Columbus for the following summer, and his and others’ efforts to find jobs and other financial support for those students. Williams discusses his perceptions of campus today, including the efforts by OSU’s Office of Diversity and Inclusion to make campus a more welcoming place for everyone, and what more he thinks needs to be done. To see Williams and three other students talk about the events of 1968, please go to http://go.osu.edu/CarmenCollection1968.