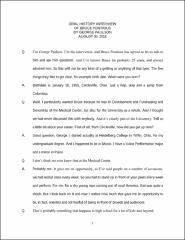 Bruce Pontious discusses his career in advancement for a number of universities, including OSU. Although he was a music performance major at Heidelberg College, Pontious’ first job was in development for that university. He eventually became Director of Alumni and Church Relations. Because of Heidelberg’s affiliation with the United Church of Christ, Pontious was offered to work in a similar capacity for United Church Homes. After 10 years there, Pontious landed a job at OSU as assistant director of development at the medical center. After 22 years, he was offered an opportunity to become Vice President of Development for the University of Arkansas, and he worked there for five years. Throughout the interview, Pontious discusses mentors who have helped him in his career, the evolution of the Advancement field, particularly its inclusion of alumni relations and communications, and why having an emphasis on building relationships rather than “selling’ something to the person is so important. He also talks about individual donors with whom he worked at OSU and the impacts they made on him, the university and the community.