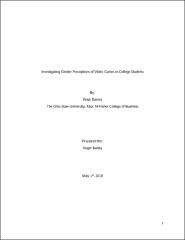 Video games have been the target of controversy for years, whether about violence or inappropriate themes and images. These stories can be damaging to the gaming industry and reflect poorly on video game players. The paper addresses gamers, who, thanks to the supposed violent and sexist games, are said to be more desensitized than non-gamers. By presenting specific characters to respondents, this study better encapsulates the range of character types found in games and combats biases on stereotypical video game characters and the gamers associated with them. To test this, a list of 20 characters, 10 male and 10 female, was compiled from some of 2017’s most popular games. These characters were ranked from not at all sexualized to more obviously sexualized. Respondents were tasked with describing 6 randomly chosen characters, 3 male and 3 female, and were then asked if they found the characters to be sexualized, and if they would play a game featuring each character. They would lastly be asked some demographic information and whether the respondent would describe him or herself as a gamer, along with the number of hours they play each week, and what proportion of their friends and family were avid gamers. The results show that male gamers and their non-gaming counterparts reported character sexualization in approximately the same proportion without a significant difference. Female gamers and non-gamers also reported sexualization of characters in similar proportions with each other. Additionally, female respondents showed a positive reception to female characters, consistently preferring to play game with females as opposed to male characters, apart from overly sexualized female characters. These patterns suggest that gaming does not have a strong affect of how gamers and non-gamers view specific characters, but rather suggest the gaming industry can be providing more exciting and fair options to female gamers in regards to their characters.