Twitter, Thought Speed, and What Happens When Your Phone Goes Back in Your Pocket 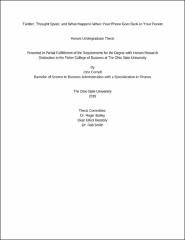 Social media applications have become nearly ubiquitous in the past decade. As research into their effects on well-being, along with mobile phones, has caught up with adoption researchers have uncovered multiple negative effects. Why do people spend so much time on social media if it leads to lower feelings of happiness and connection? We suggest that at least part of social media’s appeal stems from a relationship with thought speed. We focus our analysis on one key aspect of social media usage, which is that it allows users to choose the speed at which they absorb content as they scroll as fast as desired. Participants in our study observed the same twitter feed either at their own pace or a fixed, slow pace. Being able to control the rate at which you take in information does increase thought speed. This ability to control information intake also increases people’s cognitive performance on the next activity they undertake.