Demystifying the Elaborate, Greenwashed Performance of ‘The Wilds’ 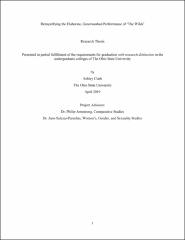 The Wilds—a safari park, conservation facility, and breeding center—tells an intricately curated story about their role as a conservation institution in the face of mass extinction. The thousands of acres of man-made rolling hills and lakes serve only as a backdrop for the elaborate performance taking place. Everything from the safari uniforms, ‘Jungle Jack Hanna’, and their cherry-picked success stories all create the dynamic narrative that The Wilds is justified as a conservation institution and is effectively performing their ethical obligation of saving species from extinction. As a site of consumer entertainment, The Wilds provides a platform for human visitors to bond and interact with increasingly endangered animals, thereby obscuring the deeply unnatural aspects of such experiences and of the power structures that underlie human-animal interactions. The Wilds glosses over the stark reality of our current ecological moment and omits the multi-layered exploitation that is situated within the park grounds. The deeply complex and elaborate performance of The Wilds as a conservation and entertainment institution demands to tell a story about loss, rescue, and utopia, while actually succeeding in little more than green-washing. I aim to demystify this space to reveal how The Wilds distorts visitors’ perceptions of the 'natural' space in order to keep business running as usual.