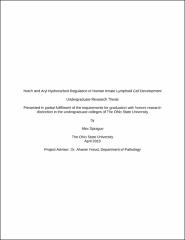 Innate lymphoid cells (ILCs) comprise a broad class of lymphocytes that include the cytotoxic natural killer (NK) cells and three subsets of non-cytotoxic immunoregulatory “helper ILC” populations (ILC1, ILC2, ILC3). In the innate immune system, NK cells play an important role in antitumor immunity, and the non-cytotoxic ILCs secrete cytokines to modulate other immune responses. All ILCs including NK cells are enriched in secondary lymphoid tissues such as the tonsil and lymph node. A common ILC precursor cell exists that can develop into each of the ILC and NK cell populations. The exact mechanisms regulating human ILC development are not fully described, yet previous studies have identified signal pathways and transcription factors involved in ILC differentiation. Based on literature precedent and our own previous reports, we hypothesized that specific signal pathways including Notch and aryl hydrocarbon receptor (AHR) are involved in regulating ILC development. To test this hypothesis, we isolated ILC precursor cells from human pediatric tonsils and cultured them with interleukin-7 and a murine bone marrow-derived stromal cell line (OP9) engineered to constitutively overexpress the human Notch ligand delta-like-1 (OP9-DL1). Notch and/or AHR were modulated in vitro via pharmacologic activation or inhibition, and cells were cultured for 28 days prior to analysis by flow cytometry. Treatment with Notch inhibitor DAPT resulted in decreased differentiation of both ILC2s and ILC3s, suggesting that Notch activation supports overall ILC differentiation. Next we tested the effect of AHR modulation on NK and ILC differentiation. Treatment of ILC precursor cells with an AHR agonist resulted in decreased NK cell development, and increased ILC3 production. In contrast, when AHR was inhibited, NK cell production was increased, and ILC3 production was inhibited. From these results we concluded that Notch signaling supports overall ILC differentiation. Furthermore, activation of AHR promotes ILC3 development and inhibits NK cell maturation. As Notch and AHR may be dysregulated in certain cancers, these studies elucidate how ILC development can be affected in the setting of malignancy.