The Link Between Mindset, Self-Efficacy for Self-Regulated Learning, and Metacognitive Learning Strategies 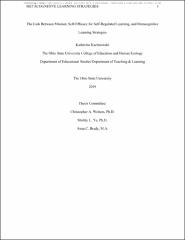