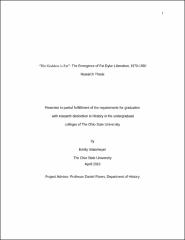 Following the emergence of second-wave feminism, lesbians within the feminist movement began to retaliate against the discrimination they felt for their sexuality and adopted lesbian feminism. Though this movement championed women, the reality was that it failed to address the myriad of women that identified as lesbians, instead choosing to focus on conventionally attractive, feminine-presenting, thin, white lesbians. Fat Liberation emerged across the United States in retaliation to the discrimination women of size felt within the movement, addressing larger topics such as diet-culture, disability activism, appropriate femininity, racial and ethnic discrimination, rape culture, and the belief that they were undesirable, and thus unlovable. Throughout the 1980s, this movement began to diversify and incorporate women outside of lesbian feminism in the fight against fatphobia as a tool against women's oppression.