ORIGIN OF SEPTARIAN CONCRETIONS IN THE HURON MEMBER OF THE OHIO SHALE (DEVONIAN), DELAWARE COUNTY, OHIO 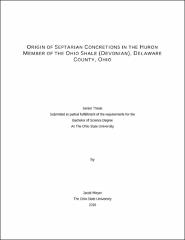