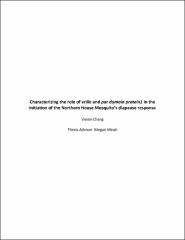 Females of the Northern house mosquito, Culex pipiens, survive the harsh conditions of winter by entering an arrested state of development called diapause. Diapause is a photoperiodic response that is initiated by the short daylengths of late summer and early fall, and diapausing females have small egg follicles and high levels of fat. Prior research suggests a functional circadian clock is required to measure daylength and initiate diapause in Cx. pipiens, but the role of additional clock genes, such as Vrille (VRI) and Par Domain Protein 1 (PDP1), is unknown. To determine whether vri and pdp1 are differentially expressed in diapausing and nondiapausing females, we first measured their mRNA levels over a 24-hour period in the brains of one-week-old Cx. pipiens, using quantitative Real Time PCR. Next, we used RNA interference (RNAi) to suppress the levels of these genes and βgalactosidase (positive control) to determine whether knocking down these genes prevents mosquitoes from appropriately responding to long day (LD), diapause-averting and short day (SD), diapause-inducing conditions. We assessed the diapause status of RNAi-treated females by measuring the lengths of their egg follicles. Expression of pdp1 oscillated in LD mosquitoes but did not oscillate in SD mosquitoes. However, the overall levels of pdp1 were higher in SD females, suggesting that this transcription factor may upregulate genes necessary for diapause initiation. Alternatively, vri expression oscillated in both LD and SD mosquitoes, but with greater amplitude in LD females. RNAi directed against pdp1 did not affect egg follicle length in LD or SD mosquitoes relative to the βgalactosidase control. However, RNAi directed against vri caused SD-reared females to have significantly larger egg follicles. Taken together, these results indicate that pdp1 and vri likely allow females of Cx. pipiens to measure and appropriately respond to short days and initiate diapause.