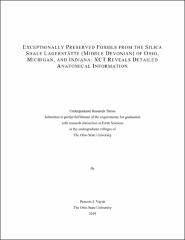 The Silica Shale of northwestern Ohio and adjacent areas of southern Michigan and northeastern Indiana contains a diverse assemblage of Middle Devonian fossils, many of which are preserved in part by pyrite. Body fossils have been collected from the Silica Shale for more than a century, and large collections have been amassed. Study of samples from the Silica Shale using X-ray Computed Tomography (XCT) reveals that internal nonbiomineralized or lightly biomineralized tissues of shelly taxa are commonly replicated by pyrite. Pyritized trace fossils also have been imaged in some layers. XCT scanning reveals the Silica Shale to be a remarkably rich Konservat-lagerstätte, and exceptional preservation by means of pyrite is present in localities stretching across the Silica Shale outcrop belt. Visualization of the internal soft tissues of some organisms has been aided further by 3D printing of digital models generated using XCT scans. With XCT, the internal soft tissues of trilobites, brachiopods, and corals have been imaged, and fine details have emerged in many specimens. Pyrite replication seems to have begun quickly after the death of many organisms present in the Silica Shale. Many enrolled trilobites (Phacops) have preserved digestive systems, although preserved guts are rare in outstretched trilobites. This suggests that enrolled specimens were corpses, whereas most outstretched trilobites were probably molts. Many brachiopods show preserved brachidia and lophophores, and a few have pyritized muscles and organs. One remarkable example of Paraspirifer shows situs inversus of the brachidia, a condition previously unreported in fossil brachiopods. Rugose corals have pyritized structures resembling mesenteries.