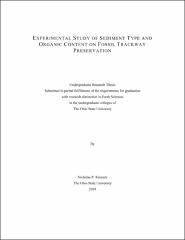 The purpose of this study was to determine the effects of different sediment types on the preservation of footprints prior to fossilization. The sediments collected were an organic-poor sand, an organic-rich sand, an organic-poor clay, and an organic-rich clay. These sediments were chosen to mimic ephemerally wet siliciclastic environments similar to those of the Connecticut River Valley deposit (Newark Supergroup, Lower Jurassic). A pair of chicken feet was used to mimic the feet of a small theropod dinosaur. The sediments were separated into containers and allowed to sit to see if any significant microbial growth would develop within the sediments. Then chicken feet were used to create prints in the damp sediment. The footprints were repeatedly hydrated and desiccated until barely or no longer visible. Based on observations made of the footprints in varied sediment types, the clays were found to be better than sands at preserving the shapes of footprints over long periods of time and repeated wet-dry cycles. Organic-rich sediments were better than organic-poor sediments at preserving the footprints. Loss of some detail with each wet-dry cycle indicates that relatively rapid burial is necessary for fossilization of trackways in unconsolidated sediment.