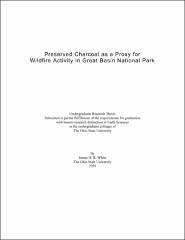 Over the past several years, wildfire has proven to be a persistent and serious concern for the western United States. Wildfires represent complex systems where specific drivers and mechanisms may not be immediately apparent. For this reason, it is useful to look at past wildlife regimes in order to determine how human effects may induce change. This project adds to a growing body of fire research by generating a paleo-climate record of past wildfire activity within Great Basin National Park. Four sediment cores have been retrieved for this project from three different wetlands within the park. Two of these cores (extracted in 2014 and 2015) have undergone lab analysis to obtain a count of charcoal throughout each core. An age-depth model has also been constructed for each core using radiocarbon dating, allowing fire activity to be extrapolated through time. Results from this study indicate recent fire occurrence of roughly one major fire every 200 years. There appears to be an extreme period of fire activity roughly 6,800 years ago. The return interval before this point appears much longer than two hundred years, signaling a rapid, sustained shift in the ecosystem 6,800 years ago. This shift may be linked to major local scale drought events seen in other paleoclimate record around this time. Two additional cores were drilled this past summer (2018) providing a clear avenue for future research. Paired with other paleo-environmental research, this analysis can be used to help understand the drivers of wildfire activity through time.