Qanats Ameliorate Impacts Due to the Desertification of the Libyan Sahara 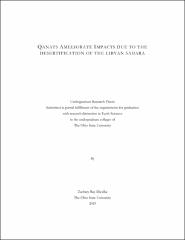 This study looks at the city of Germa within the Fezzan region of Libya. The city is located at the base of an escarpment and is surrounded by sand due to the hyper-arid environment. Understanding the past and how this area developed give perspective on how people are living there now. This study focuses on the Late Pleistocene and Early Holocene when there were periods of humidity and aridity. The cause for these fluctuations could be the result of planetary behaviors and cycles influencing the solar radiation upon Earth. The periods of humidity were known as a Green Sahara or African Humid Period. During the last humid period, large lakes existed that eventually disappeared leaving underground water sources that are still utilized today. When the water disappeared and the land became arid, most people migrated. One civilization, the Garamantians, not only stayed but also thrived. Once known as pastoral farmers, the Garamantians established an empire centered on agriculture, trading, and slavery. Much of their culture came from Egypt or Persia with Roman influences. They adopted the Persian foggara technology, which consists of a sub-horizontal underground tunnel that uses gravity to transport water for irrigation. The eventual decline of the water table led to the demise of the Garamantian Empire. Today, the foggara is referred to as a qanat and even though they are still utilized, motorized pumps are replacing them. The use of pumps, however, overdraws the water and without a source of replenishment, groundwater sources are becoming depleted.