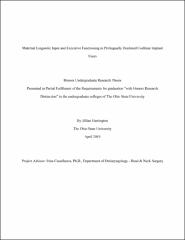 A cochlear implant (CI) is a biomedical device that provides the sensation of hearing to many individuals with profound-to-severe hearing loss. Prelingually deafened CI users are at an increased risk for delays and disturbances in neurocognitive skills including delays in executive function (EF): the self-regulation of cognitive and emotional processes during goal acquisition (Castellanos et al., 2015). In children who use CIs, as well as their normal hearing (NH) peers, the development of EF and language skills are closely tied (Hunter, Kronenberger, Castellanos, & Pisoni, 2017). Strong evidence shows that pediatric language skills are fostered by the language that mothers provide to their children, termed Maternal Linguistic Input (MLI; DesJardin & Eisenberg, 2007). However, research has not yet examined the role, if any, that MLI may play in the development of CI users’ executive functioning skills. In this study, we sought to examine the relationship between MLI and children’s attentional skills. Twelve mother-child dyads participated in a 5-minute free-play session and MLI was transcribed and categorized. Six CI users and six NH children completed language assessments through the Clinical Evaluation of Language Fundamentals for Preschoolers (CELF-P) and a digital assessment known as the Flanker task that measures inhibitory control and selective attention (Weintraub, Bauer, Zelazo, Wallner-Allen, Dikmen, Heaton, … & Gershon, 2013). Results suggested no significant differences between executive functioning skills between CI users and NH peers. However, CI users received significantly more maternal directives than their NH peers and, collapsed across hearing status, attentional directives were negatively associated with Flanker scores, suggesting associations between MLI and executive functioning skills. Further research is needed to understand the association between MLI and executive functioning skills that may promote the establishment of effective intervention strategies to support healthy neurocognitive development in pediatric CI users.