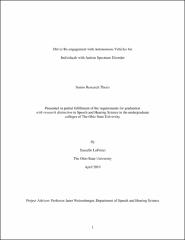 Autonomous driving is a new technological advance that may provide greater freedom in mobility to specific populations. Among these beneficiaries could be individuals with Autism Spectrum Disorder (ASD). ASD describes a mosaic of social communication deficits and repetitive and abnormal sensory motor-behaviors. Difficulty in shifting attention between tasks has also been identified as an issue for these individuals. In light of this difficulty, the ASD population may actually experience challenges with autonomous vehicles, particularly when situations arise in which the driver unexpectedly needs to regain control of the vehicle. Previous work has indicated that drivers with ASD restrict themselves in their driving experiences, preferring to minimize unexpected occurrences. The need to re-engage with driving in an autonomous vehicle is critical and clearly unexpected. It is important to understand the factors that might impede re-engagement. The ability to shift attention rapidly may vary substantially for all individuals, including individuals with ASD, depending on the type of alternative task in which the driver is engaged. Little is known about the effect that the type of alternative task has on driver behavior in autonomous vehicles. The present study explored the effect of different types of tasks on attention shifting for drivers with and without ASD. Twenty-four participants were required to drive a prepared autonomous driving scenario in a simulator in the Ohio State University Driving Simulation Lab. During the autonomous drive, participants performed randomly assigned tasks including a gaming task, a music listening task, a video-watching task, and no task. At selected points, an auditory alerting system notified the participant to re-engage with the vehicle. Reaction time for re-engagement was measured. Although testing is still underway, preliminary results indicate that participants with ASD had longer reaction times for all tasks. In addition, a borderline significant difference across different tasks was observed. The results of the present study will form the basis for additional work exploring the ways in which vehicles can be adapted to maximize safety for individuals with ASD.