The Austro-Hungarian Divisions on the Western Front, 1918 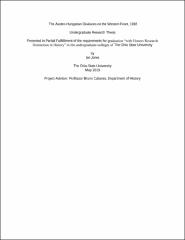 The presence of Austro-Hungarian troops on the Western Front is little-known in the historiography of the First World War. From July 1918 until the end of the war in November, four infantry divisions and a number of artillery units of the Austro-Hungarian Army participated in the desperate, increasingly futile struggle of the German Army on the Western Front against the inexorable advance of the Allied Hundred Days Offensive. As the Habsburg Monarchy itself disintegrated and the main body of the Austro-Hungarian field army collapsed in Italy, the soldiers of the 1st, 35th, 37th Honvéd, and 106th Infantry Divisions labored and fought under close subordination to the German forces in northeastern France, sequestered hundreds of miles away from the seminal political and military events of the dissolution of Austria-Hungary. Indeed, by the time that k.u.k. troops withdrew from their positions in Lorraine at the beginning of November, the state that they fought for had de facto ceased to exist. To be sure, the Habsburg military played a distinctively subordinate and mostly insignificant role on the Western Front. For one, the Western Front was never the primary theater of operations for the k.u.k. Armee. Even after the deployment of entire k.u.k. infantry divisions to France, Habsburg troops constituted a minuscule proportion of the German forces in the West. Likewise, given that the military defeat of the Central Powers was a foregone conclusion by the summer of 1918, the contribution of these Austro-Hungarian divisions in military terms was negligible. Although k.u.k. units did not have any meaningful impact on the final battles of the Western Front, the phenomenon of Habsburg forces fighting in France is significant in other ways. Firstly, the deployment of k.u.k. infantry divisions to France in 1918 represented the final stage of Austria-Hungary’s intermittent but longstanding participation in the fighting in the West, a role largely forgotten in most histories of the Great War. Similarly, both the diplomatic and strategic background of the deployment of k.u.k. divisions to the West and their employment in northeastern France exemplified the culmination of the wartime relationship between the Austria-Hungary and Germany, specifically the political and military subordination of the Habsburg Monarchy to the German Reich. Lastly, the experience of the Austro-Hungarian divisions in France typified the wartime evolution of the k.u.k. Armee, exhibiting the progress made by the Austro-Hungarian military in organizational, technological, and tactical modernization. Yet, at the same time, the ultimate inability of the Habsburg forces in France to successfully resist the Franco-American onslaught demonstrated that the wartime adaptations of the Austro-Hungarian military could not overcome the immense superiority of the Entente forces or the progressive disintegration of the Habsburg military and state.