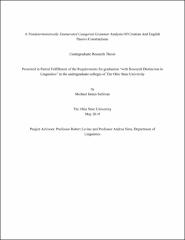 Passive or passive like constructions, such as those in the Croatian data within, make regular appearances in the cross-linguistic topography (Dixon & Aikhenvald 2010). These morphosyntactic phenomena reduce valence and promote a canonical object to the canonical subject position or inflection, or both. Their inherent complexity presents formal challenges to any current syntactic framework, and yet, as salient and widespread linguistic data, they must be accurately accounted for. This paper will introduce relevant data from three separate classes of modern Croatian passive and passive-like constructions. The creation of a formal explanation for these phenomena presents several interesting challenges to any theoretical framework, due to several morphological, syntactic, and semantic idiosyncrasies, whose variation between constructions seems to defy any sort of apparent pattern. The objective of this thesis is to explain the obstacles to an analysis in both Transformational (TG) and Categorial Grammars (CG), and finally, analyze the data in the Nondeterministically Enumerated Categorial Grammar (NECG) framework, while simultaneously deriving (nearly) synonymous English examples and providing the reader with a step-by-step explanation of the derivational mechanisms of NECG.