The Effect of Poor Investment Experiences and Personality on Risk Aversion 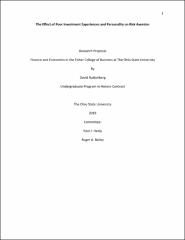 This study analyzed the relationship between certain personality traits, as measured by the Big Five Inventory Assessment (Donellan, et al. 2006) and their Constant Absolute Risk Aversion score (Pratt 1964)(Arrow 1965) moderated on the variable of whether one has experienced a negative investment return. The experiment was conducted on 293 respondents from Amazon’s Mechanical Turk platform. Respondents were first given a 20-question version of the Big Five Inventory assessment to measure the degree to which they exhibited the five personality traits. Then, respondents would be told that they were entering a lottery that would determine whether their survey compensation would shrink, with half of respondents being told that they would lose the lottery, and therefore, would experience a simulated negative return. Afterwards, respondents were presented with up to 17 decisions, each consisting of a fixed winning, which would increase in every choice, or a 50-50 lottery with $100 and $0 as the possibilities. Risk aversion was measured based on when respondents first chose the fixed amount. The results showed that the only statistically significant interaction was the moderating effect of the simulated negative investment return on the relationship between the personality trait Openness and risk aversion. However, given the insignificant isolated effect of the treatment, it is likely that the loss involved was not large enough to simulate an actual investment return. Additional research will go farther in reaching a deterministic conclusion as to the associations to be found from this experiment.