Language of the Land: The Politics of Mapudungun Language Death and Revitalization in Chile 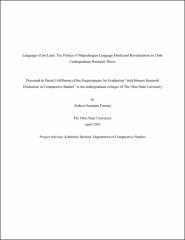 Mapudungun, meaning “language of the land,” is the language of the Mapuche people, who make up the largest indigenous population in Chile. Mapudungun is facing language death, with only an estimated 250,000 Mapuche people (a total population of around 1,400,000) being able to converse according estimates made in 2016 (Zuñiga and Olate 2017). Historically, the Mapuche people have been marginalized, their culture stigmatized, and their lands forcefully expropriated and exploited, since the Spanish colonization of Chile in the late 16th century and the establishment of the Chilean state in 1818. These prejudices and the internal colonization of the Mapuche people within Chilean borders have continued into the present day. Since the fall of the fascist Pinochet dictatorship in 1989, a regime which set into place neoliberal measures eliminating collective land rights for the Mapuche people, the Chilean state has taken initiatives to celebrate and preserve indigenous languages and culture, often utilizing a discourse of promoting “interculturalism” and “diversity” (Carter 2010). Meanwhile, Chile’s governing systems of colonialism and neoliberalism continue to push Mapuche communities off their ancestral lands, and reject their requests to recuperate land usurped during the dictatorship, all in favor of transnational corporations and large land owners. The modern Mapuche movement which emerged during and coming out of the time of Pinochet has put forth both material and cultural demands, and has continually faced brutal repression and surveillance by the government (Fernandez Droguett 2015). This thesis examines the contradiction between the state’s measures to “protect” indigenous culture and “foster diversity,” and its otherwise contradictory system of colonialism and neoliberalism and policies of repression toward the Mapuche people, both historically and against the emergent Mapuche movement. Revitalization efforts have suffered from top-down organization and implementation, and have largely neglected to situate the process of language loss within the context of colonialism and systemic racism. Overall, state-led revitalization efforts have not been robust enough to effectively reverse the process of language shift among the Mapuche people. I argue that these efforts can be understood through Hale’s (2002) concept of neoliberal multiculturalism, in which states strategically co-opt cultural demands put forth by indigenous movements and ignore more substantial material demands in order to advance their neoliberal agenda. The thesis discusses the potential and limits of resistance movements using culture as a basis for solidarity, given the danger of neoliberal co-optation and demobilization.

The Marilyn R. Waldman Award for the best undergraduate paper in Comparative Studies, 2019