Breaking Down Broken Windows: An Analysis of Quality of Life Policing and Equality 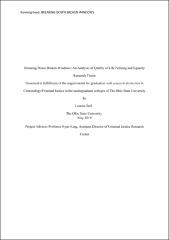 In their 1982 article, Wilson and Kelling offer broken windows as a functional theory of social control to prevent serious crime in the United States. They hypothesize that broken windows in theory and action can prevent more serious crimes from occurring if minor offenses are aggressively policed. Since 1982, broken windows has been inspirational to a number of policing styles and programs in the United States and frequently implemented. With broken windows increasing in popularity, discussion regarding its effectiveness and impact has dominated research in the recent years and remained largely misinterpreted and disagreed upon. The goal of this research is to examine what relationship, if any, broken windows policing has on minority and poor communities. The first section of the paper introduces broken windows theory and its presence in the United States criminal justice system. The second section describes the theory as proposed by Wilson and Kelling. The third section on broken windows and inequality assesses the interaction and consequences of broken windows programs in Kansas City, New York, Chicago, and Baltimore. The fourth section traces the historical purpose and enforcement of quality of life policing and connects broken windows tenants to the historical policing of the poor in England. The fifth section is an analysis utilizing the 2006 New York Stop, Question, Frisk study through which I delve into the demographics of the individuals stopped under a popular broken windows program. The findings of this analysis support the claim that broken windows in enforcement and theory results in increased police presence for minority citizens.